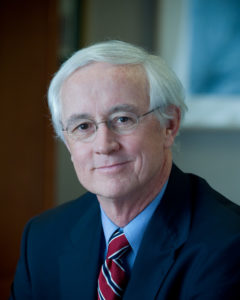 Jim Hoolihan is the president of Industrial Lubricant and Can-Jer, Grand Rapids, Minn-based companies providing industrial supplies and services to the logging, railroad, taconite and coal-mining industries. The Hoolihan family has owned the businesses for more than 65 years.

A native of Grand Rapids, businessman and civic leader, Jim was Grand Rapids’ three-term mayor from 1990 through 1995. He served as the Foundation’s president and CEO from 2004 through 2011 and had served a previous term (from 1992 to 2003) as a Foundation trustee. He currently serves as the individual co-trustee of the CK Blandin Residuary Trust.

Jim has served on several civic boards and commissions, including Ready for K board of directors; the Governor’s Task Force on Mining and Minerals; United Way of Grand Rapids as campaign chair; and chair of Itasca Development Corp/Jobs 2020. He is a trustee of Saint Joseph’s Catholic Church and a past trustee of the College of Saint Scholastica, and serves on the board of directors for the Duluth-based ALLETE company.