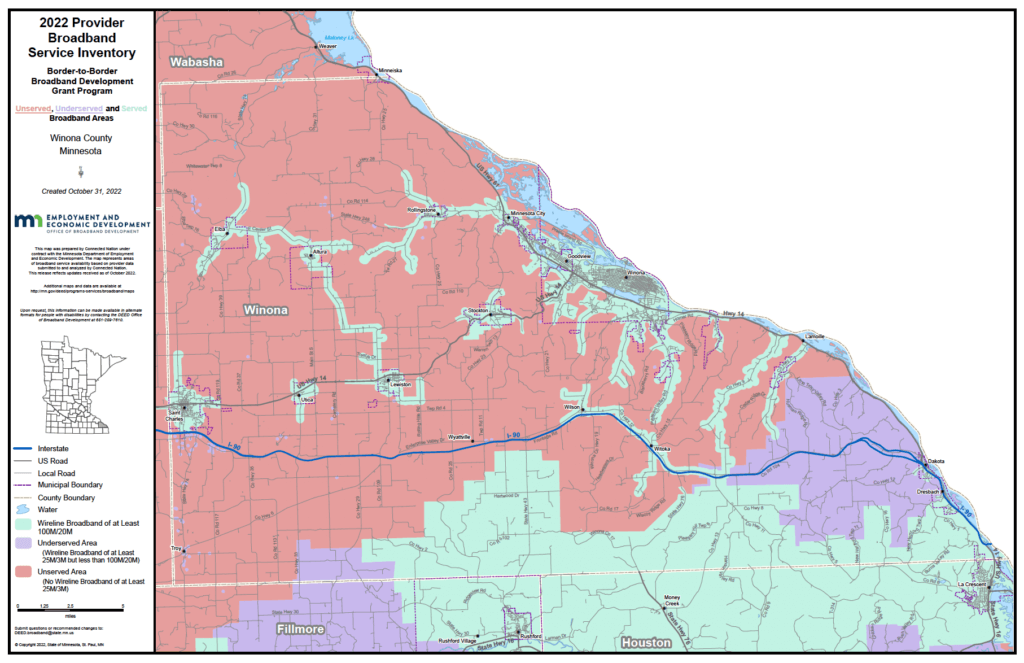 Winona County ranks 30 for broadband access and 20 for digital equity out of 87 counties. They have hovered from 85-87 percent coverage to broadband of 100 Mbps down and 20 up since 2018. There is a slight dip in access this year but it is within a margin of error and may simply reflect a more granular look at access. They have 3123 households without access to broadband at that speed. Estimates indicate that it will cost $29 million to get to ubiquitous broadband in the county.

Winona County will benefit from a border to border grant announced in December 2022:

Winona County has been focused on broadband for years; they were part of the Minnesota Intelligent Rural Communities (MIRC) starting in 2010, a Blandin-led and federal (ARRA) funded broadband adoption project.

In 2022, HBC announced 10 Gig residential service in the City of Winona. Two months later they announced expansion in rural parts of the county.

They have benefited from past grant funded projects and will benefit from a project that received MN Border to Border funding in the last round and have opted to use CARES funding to invest in broadband. Winona County has allotted $1 million in CARES funding to pay for rural broadband expansion projects.

Winona County has work to do but recent events and awards help them retain their yellow code.

Winona County ranks 17 out of 87 for computer ownership. 94 percent of homes have a computer of device as compared to statewide ownership of 95.5 percent.