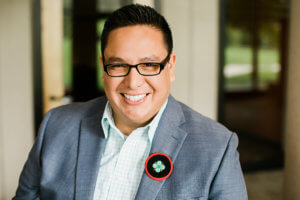 Dustin (Pam-Mbwit-M’ko) is a proud member of the Prairie Band of Potawatomi Nation of Mayetta, Kansas.  He earned a bachelor’s degree in geography from St. Cloud State University and holds a master’s degree in organizational development from The College of St. Scholastica.

Dustin’s work in Indian Country and rural Minnesota have allowed him to build a diverse background in small and large for-profit businesses, non-profit organizations, Federal/Tribal governments, Tribal gaming and now Tribal economic development.  Dustin currently serves as the vice president of business and economic development for Mille Lacs Corporate Ventures.  In this role, he works to build economic vibrancy in the communities of East Central Minnesota by connecting people and capital to leverage sustainable investments in business, workforce housing, and planned infrastructure.  Since beginning this role, Dustin has worked on over $30MM in community investments and facilitated numerous community-building events and presentations.  Dustin’s previous roles have included working as an executive for Grand Casino and Indian Health Service, and as a manager for an upscale Hilton hotel.

Dustin’s community leadership roles have included serving on the Culinology and Hospitality Management advisory council for Southwest Minnesota State University and on the board of directors for Central Lakes College Foundation.  He has regularly volunteered at local schools and universities to engage with students about the importance of higher education.  Dustin has also created a nonprofit initiative focused on strengthening Native American family connections through showing love and appreciation to Native American Elder grandmothers.

Dustin resides in Brainerd with his wife and two children.