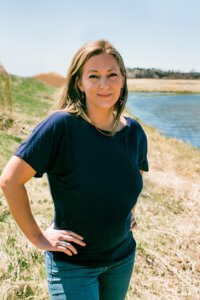 Tuleah Palmer began her role as president and CEO of Blandin Foundation in Grand Rapids, Minn., in July 2020.  In this role, she oversees the foundation’s grantmaking, community leadership training and public policy initiatives, as well as stewardship of foundation resources.

For her work in racial equity and Native community development, Tuleah was recognized in 2019 by St. Paul & Minnesota Foundation as its Facing Race Statewide Award honoree.  She and the Northwest Indian Community Development Center also received the Bush Prize in recognition of proven community impact, with a $500,000 award used to address homelessness in Bemidji, including developing housing for women returning from incarceration. She was named to the Young Women’s Initiative Executive Council in 2021.

Tuleah was born in Deer River, Minn., and has worked in and lived across Northern Minnesota.  She holds the Bachelor of Arts degree in Applied Psychology from Bemidji State University.  She has served as tribal planner and community development grant writer for Leech Lake Band of Ojibwe, as an independent nonprofit management consultant, and executive director of the Boys and Girls Club of Leech Lake Area.

As a teenager, Tuleah became an advocate for children and women experiencing domestic abuse.  She has been a trainer in the effects of child-witnessing family violence, a victim services coordinator for Beltrami County Attorney’s Office, and a provider of direct services and advocacy for those victimized by domestic violence as part of the Domestic Abuse Intervention Project in Duluth.

Tuleah is the parent of school-aged children and has lived in Cass Lake, Minn., for 15 years.