This award is made in posthumous recognition of the Courageous Leadership of Paul Bergman, whose vision for a broadband-enabled future for Lake County brought modern access to the Internet to the residents of the county he loved.  Paul served as County Commissioner from 2007 until his death in 2013. 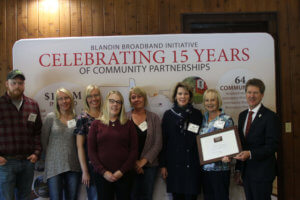 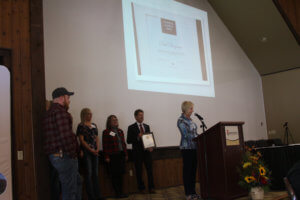 As a businessman, Paul was known for his good will and humor and his signature of honesty and fairness. He had a gift for bringing out the best in others.

These good traits prompted voters to elect Paul to represent District 4 on the Lake County Board of Commissioners.

It was a job that he loved. As a Commissioner, Paul championed bringing a fiber-to-the-home fiber optic network to Lake County. He understood that the county’s future depended on it.

At the time of his death, Paul was serving his second term in office.

Today, Lake Connections, is a 1,200-mile fiber network across Lake County and parts of eastern St. Louis County operated by Zito Media in what has to be some of Minnesota’s most rugged and difficult territory for broadband deployment.

Today that network is delivering a myriad of benefits to county businesses and residents.

Unlike many Minnesota’s counties, Lake County is well served and poised to meet MN’s 2026 state speed goal of 100/20 Mbps.

Some of the benefits the county is enjoying from the network include:

Median household income in Lake County is growing, house prices are climbing, and anecdotally, residents say more families are moving in because of the broadband connection. The network is one more big asset to the county: they have Lake Superior.  And they have future-proof fiber installed countywide.

According to a Blandin Foundation study on the Return on Investment in broadband infrastructure in five rural Minnesota communities, by 2018 residents of Lake County had enjoyed a combined household economic benefit from the network of $13,695,550 and a combined increase in residential real estate value of $38,547,421.

“I think one of the things you have to remember is … we started this project off and we encountered all kinds of obstacles that we never thought we were going to have. But as the end result, if the county had not stepped up to move in the direction of putting broadband throughout the county, it wouldn’t have happened. No other provider was going to build a broadband network with the speeds and capabilities that we have for our rural constituency.”