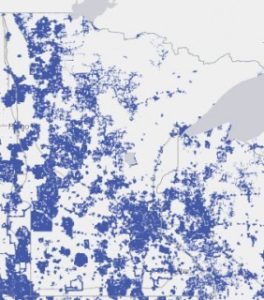 Broadband technology is revolutionizing rural life. From budding online entrepreneurs, to long-distance learners, grandmas on Facebook to telehealth, online connectivity is opening up opportunities in rural America that did not previously exist.

Recognizing the importance of broadband to the health and vitality of rural communities, in 2003 Blandin Foundation made a decision to commit resources to increasing awareness about the value of broadband. Through programs like Minnesota Intelligent Rural Communities and the Light Speed Program, rural communities from across the state have made significant strides in utilizing available broadband connectivity.

However, the quality of available broadband continues to be a challenge.

This week, the National Telecommunications and Information Administration (NTIA) released a map that shows what high-speed Internet services are available in every neighborhood in the country. The good news – in 2012, 99 percent of Americans had access to some form of broadband. The bad news – there is still a big gap between rural and urban connectivity.

Minnesota Public Radio Ground Level Blog writer Dave Peters breaks down the NTIA’s interactive map to show what the data means for rural Minnesota. The map confirms that rural Minnesota, like many other places in rural America, has the capacity to do things like browsing the web, checking email and streaming music, but once you move toward higher speeds (10 and 25 megabit networks), 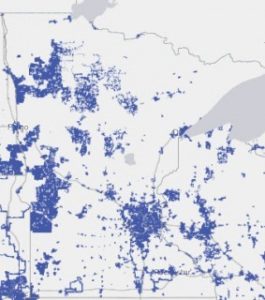 coverage is significantly reduced.  Higher speeds like these are needed to stream video effectively among other things.

the map data also make clear that there is still more work to be done – particularly when it comes to building out the advanced, high-capacity telecommunications networks that our nation needs to compete and succeed in the global digital economy.

One piece of that work is to introduce people to the kinds of tools available over high-speed internet that can help in their lives. (In broadband lingo, this is called “boosting adoption.”) This summer, nine Blandin Broadband Communities are working on projects that address identified broadband adoption needs in their communities. These projects are intended to spur interest so local residents increase their use of the broadband available – which in turn could inspire in other communities to explore expanding broadband in their community. And as demand grows, it seems fiber companies could be more likely to increase supply. Meaning that in 2015, the 10 and 25 megabit map might look a little bit different!