A small bite of the Itasca area hunger picture 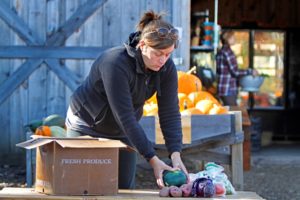 Last week, the USDA released this year’s report on household food security. It breaks down like this:

Households that faced food insecurity in 2012:

That 11 percent translates to 23,190 people (about equal to half the population of Itasca County) in the food bank’s seven-county service area, according to Sue Estee, Executive director of Second Harvest North Central Food Bank. That includes 8,790 children.

“Food insecurity is real here in our area!” said Estee.

KOOTASCA Community Action reports that in Itasca County, 1 in 5 children –or about 1,700 kids — live in food-insecure homes, meaning that in the past twelve months those households lacked access to enough food for an active, healthy life for all household members.

According to the USDA report:

incomes near or below the Federal poverty line, households with children headed by single

women or single men, and Black and Hispanic households. Food insecurity was more common in

“Another statistic that is in line with the food insecurity percentage is the number of [Itasca County] residents under 65 without health insurance—11.2%,” said Jim Woehrle, KOOTASCA’s executive director.

Figures on food insecurity could increase noticeably, and soon. In 2011, SNAP benefits were distributed to more than 5,500 people in in Itasca County; these benefits generated more than $13.4 million in estimated community spending. Subsidies of the Supplemental Nutrition Assistance Program (SNAP) implemented as part of federal stimulus in 2009 expire in November. And the current draft of the Farm Bill currently under consideration in Congress includes an additional $40 million in cuts to the program, impacting families in fragile situations here and elsewhere.

“The November cut alone will cause more people to cut back on food and need our charitable services more,” Estee said. “If more cuts are made in the future Farm Bill negotiations, we will see real hunger here.  Charity will not be able to fill that gap.”

“Any reduction in the SNAP program further reduces people’s ability to pay other bills and will put even more pressure on local food shelves, homeless shelters and rent assistance programs,” said Woerhle. “The SNAP program is, for many, a work support program. For those that are working reduced hours or low pay, it is the SNAP program that helps workers keep it together at home, feed their family and be productive at work.”

Some things to ponder with our long Minnesota winter on the horizon.