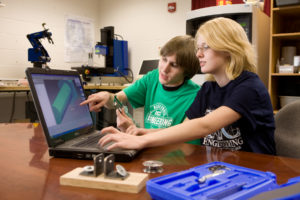 “It’s like trying to teach a kid to play the clarinet without a reed,” said Aaron Wenger, engineering instructor at Itasca Community College (ICC). “We’ve got to give them the tools they need to succeed.”

ICC engineering attracts students from around the state with their nationally acclaimed program, but how many of those students actually complete the program?

The root cause might be found in the sequence of courses taught to incoming freshmen.

“They show up for college and we give them 900 pages of physics, chemistry and calculus. A good 80% of the material they cover doesn’t apply to engineering,” says Wenger. “Then we’re surprised that 60-70% of students drop before the end of the year.”

With a $292,000 grant from the Blandin Foundation, Wenger hopes to take a deeper dive into curriculum changes that need to happen for engineering students to succeed – especially students that come from non-traditional backgrounds.

“Curriculum reform is intimately tied to the recruiting of non-traditional students,” says Wenger. “The way courses are set up now, it’s particularly onerous for someone who comes from a home with little educational background.

It’s important to have non-traditional students represented in our program. A student who has grown up professionally in the company of students that fit the demographic of the country will be better engineers.”

Altering an engineering curriculum to meet the needs of incoming students is not a small undertaking. Wenger says this conversation has been going on for over 30 years, and a successful model has yet to emerge. The conversation must continue, though, because of the potential doors that could open for all students.

Curriculum changes in the ICC engineering program have the ability to raise retention rates and help students from all backgrounds achieve a degree in a challenging, yet increasingly sought after, field.