Got broadband on the brain? If not, you should! Here’s why…

Buzz continues to build for next week’s Border to Border Broadband Conference. With Senator Matt Schmit’s Listening Tour wrapping, rural Minnesotans have broadband on the brain.

On top of that, today Blandin Foundation announced their latest round of broadband grants. Projects like GIS mapping of broadband availability in Mille Lacs County, equipping a tele-work center for telecommuters and after-school homework in the City of Mora, and advancing digital literacy among immigrants and refugees in Winona will help to build the culture of broadband use in rural Minnesota.

On the heels of this announcement was yet another that could potentially have an exponential impact throughout Minnesota.

On Monday, the Governor’s Broadband Task Force released their 2014 Annual Report, complete with recommendations on what direction they believe Minnesota should take to achieve its goal of border to border broadband by 2015. Some highlights include establishing a broadband infrastructure grant fund to provide access to about 100,000 Minnesota residents currently un-served, creating an Office of Broadband Development operating fund to promote broadband adoption and use, and to continue the Connect Minnesota mapping effort to measure the state’s progress toward the 2015 goal.  Blandin Foundation director of public policy and engagement Bernadine Joselyn sits on the Governor’s Task Force. Of the report, she says

Blandin Foundation is all about helping rural leaders name and claim their own futures, and we recognize that broadband is essential infrastructure for making dreams come true.

This Task Force report highlights the troubling gap in broadband availability that persists between rural and urban residents of our state, as well as the troubling gap between those who are digitally literate and those who are not. In today’s world, access denied is opportunity denied.  Imagine your life without Internet access and the ability to use it!  Because we care about expanding opportunity for all, Blandin Foundation is particularly gratified that the Task Force’s recommendations include funding the state’s new Office of Broadband to support broadband adoption and use, especially among the poor, elderly, and less-well educated.

Join the conversation by registering for the conference, joining the conference Facebook page, or following #mnbroadband on Twitter. The conference will also be live streamed via The Uptake at http://theuptake.org/. 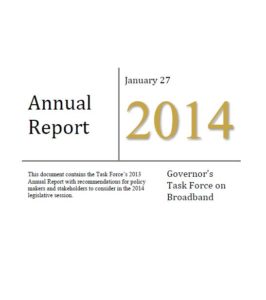