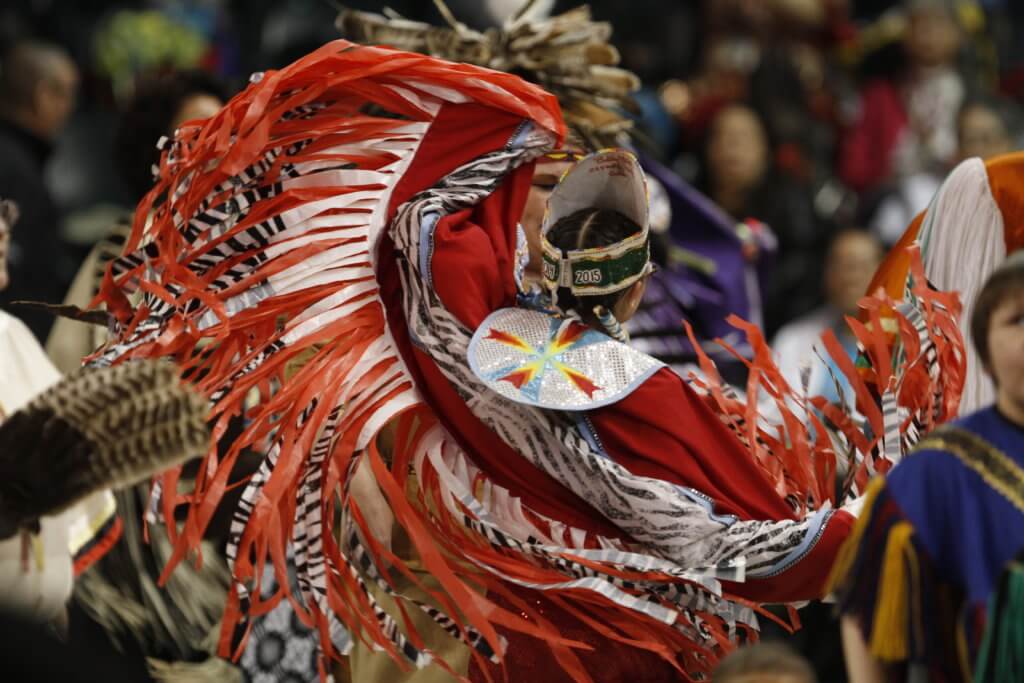 “I wanted to indigenize Census 2020 because it’s so important to our Native communities,” said Anjeni, currently a college student at Haskell Indian Nations University in Lawrence, Kansas. “By turning the census into a Native event, we can encourage Indian country to get out and get counted to make sure we receive the resources we need for the next ten years!”

She shared her idea with her grandmother, Marilyn Miller, the US Census Bureau Tribal Partnership Specialist at the Chicago Regional Office. Marilyn passed it on to her friend Shelly Diaz, Urban Liaison for the Mille Lacs Band of Ojibwe and Coordinator of the Tribal Hub for the 2020 Census. With Shelly as a champion, Anjeni’s idea gained momentum, spreading to Minnesota’s 11 tribal nations.

Now coined 2020 Census Pow Wow Day, this statewide event is set to take place March 21, 2020. All Minnesota tribes are invited to hold a pow wow in their community to celebrate and recognize the importance of the upcoming census. All events are open to the public.

“Through drum and dance, we pray and celebrate the census and indigenize it,” said Shelly. “We will make this OUR census while sharing our culture with all.”

Shelly is one of many leaders across Minnesota’s tribal nations working to make sure every person of Native decent is counted. Together, under the banner of the Tribal Hub (a Complete Count Committee made up of 11 tribal Nations), Native leaders are collaborating to increase census participation after a 4.9 percent under-count in 2010.

“Our numbers matter,” said Shelly. “If we’re not fully represented, it impacts funding in our communities and the accountability of the federal government to uphold treaty rights.”

Treaties, or legally binding contracts between sovereign nations that establish political and property relations, were established between a number of Native Nations and the United States government from 1778 to 1871. Each treaty is unique, with many outlining specific promises of federally provided health care, education, housing, economic development and agricultural assistance. Census numbers matter to how treaty promises are delivered.

“Native communities share a common history, common relationships,” said Shelly. “Working together makes our voice stronger so that our communities continue to thrive.”

Shelly started in early 2016 building partnerships across Minnesota’s Native communities to get ready for the 2020 Census. In May 2019, she invited the census liaisons for each of the 11 tribal nations to meet and they formed the Tribal Hub. The Hub now meets monthly to share best practices and resources.

At the state level, Diaz joined the Co-Creators Table, a cross-sector collaboration of organizations and individuals working together for a full census, to help develop a mobilization plan for under-counted Minnesotans. She is also working with Indian Country Counts, a national initiative launched by the National Congress of American Indians, to connect to the work tribes are doing outside of Minnesota.

“Forming partnerships is the way to get the most out of our resources,” she said.

Together, the members of the Tribal Hub have created resources for trainings, articles to share in their communities, and a Facebook group to keep each other updated on census efforts.

Tribal communities face unique challenges in the census count. A checkered history with the federal government has left an overall sense of mistrust and fear, which impacts the likelihood of individuals wanting to be counted.

Members of the Tribal Hub are increasing their efforts to recruit community members on each reservation to help spread the word about the importance of the census.

“When in doubt, check the ‘American Indian’ box,” said Shelly.

Filling Out Forms in Community

Aptly timed, census forms and postcards will start showing up in mailboxes the week before the 2020 Census Pow Wow Day. Attendees will be able to fill out forms right there on the spot with their fellow community members.

Shelly is looking into ways to connect across geography so tribes can celebrate together via telepresence.

One attendee at the Minneapolis Urban Pow Wow will be Anjeni del Real, who’s being honored for her coordinated pow wow idea by being the Head Dancer.

“I’m ecstatic Minnesota tribes are to host the Census 2020 Pow Wow—to indigenize the Census and make it a part of our life and community,” said Anjeni. “I’m excited to join them on March 21st.”