Program Requirements and Impact in Minnesota

The FCC’s Connect America Fund (CAF II) is designedx to spur broadband deployment in unserved, high-cost rural areas with phone and sometimes Internet services provided by large telephone companies regulated as price cap carriers. These carriers have accepted payments from the FCC to deploy broadband services to a targeted number of households in their service areas.

Over the five-year program, four companies serving rural Minnesota will receive federal funds for broadband deployment. Construction using CAF II dollars began in 2016 and must be complete by the end of 2020. Companies were required to have completed at least 40 percent of the funded network built by the end of 2017.

Not all unserved areas will benefit from this program: Areas where at least 3 Mbps upload speed is currently available or where deployment costs exceed FCC limits are excluded. xi This map illustrates eligible areas in Minnesota, with the two large CAF II recipients noted. CenturyLink areas are shown in green and Frontier in red. 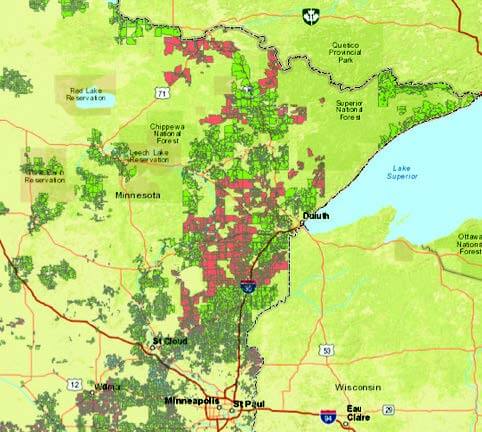 ← Study Methodology Understanding the Networks →
Back to Report Home  ·  Authored by Community Technology Advisors. Published July 2018.
Back to Top