One of the nine dimensions is Community Leadership, defined as broad-based leadership structures in which many people fill leadership roles.

Rural Pulse study findings show a slight decrease from 2013 to 2016 in rural resident opinions about inclusion within community leadership roles. While half (50%) of rural residents say that they feel local community leadership is comprised of people from different backgrounds, 44 percent feel that this is not the case. Urban residents are much more likely than their rural counterparts to agree (68% urban, 50% rural). 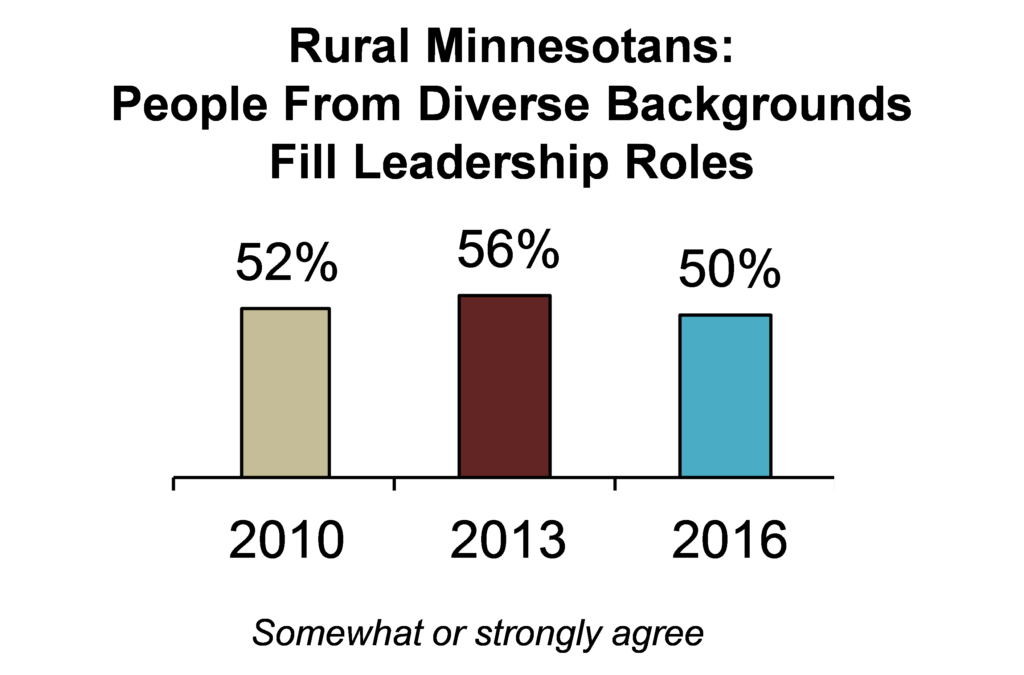 West Central residents are the least likely to agree.

Women, younger Millennials (ages 18 to 24) and those with household incomes of $60,000 or less are the least confident in local leadership inclusivity. 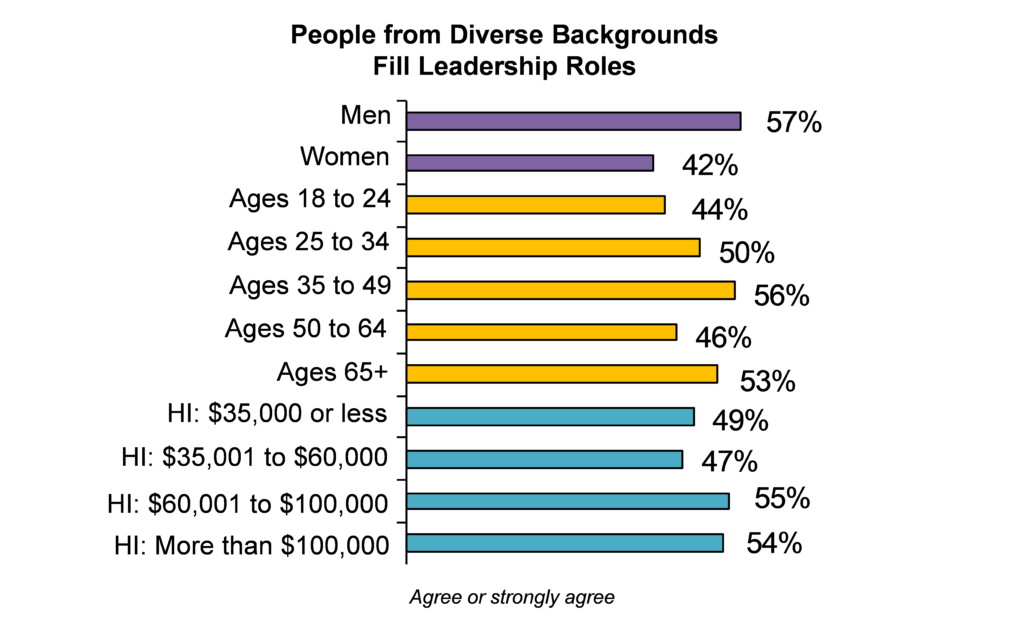 Demographics clearly appear to play a role in the likelihood to serve. Younger Millennials (ages 18 to 24), those with lower incomes and non-business owners are the most likely to say that they have not served in leadership. 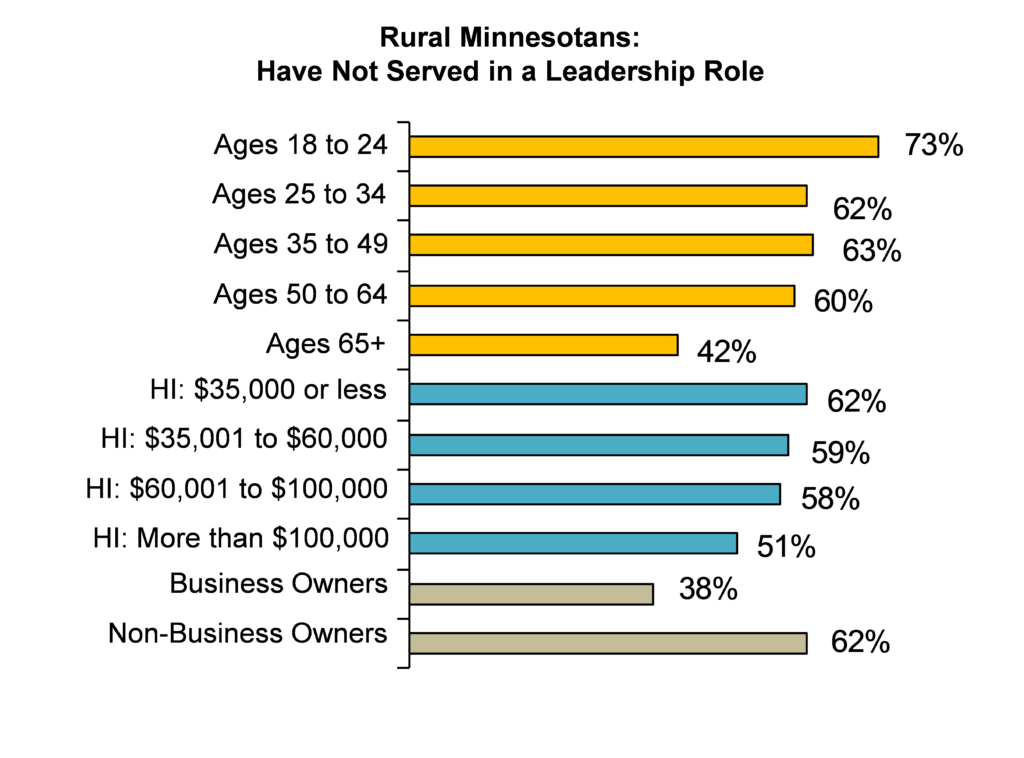 Close to half (46%) who have not served as a leader say that the main reason is lack of time. Forty-three percent say they would have no interest in doing such, a significant 18-point increase from Rural Pulse 2013. About one in four (26%) say that they have never been invited to participate as a leader, more than twice as many as in 2013. Another eight percent cite other reasons such as a disability or being new to the area, among others.

Many Millennials, especially those ages 18 to 24, cite having no interest in serving in a leadership capacity. Residents ages 35 and older are more apt to say the reason is a lack of time. Those with incomes of $35,000 or less are less likely to show interest in being a leader, while higher income groups say a lack of time keeps them from serving in a leadership role. 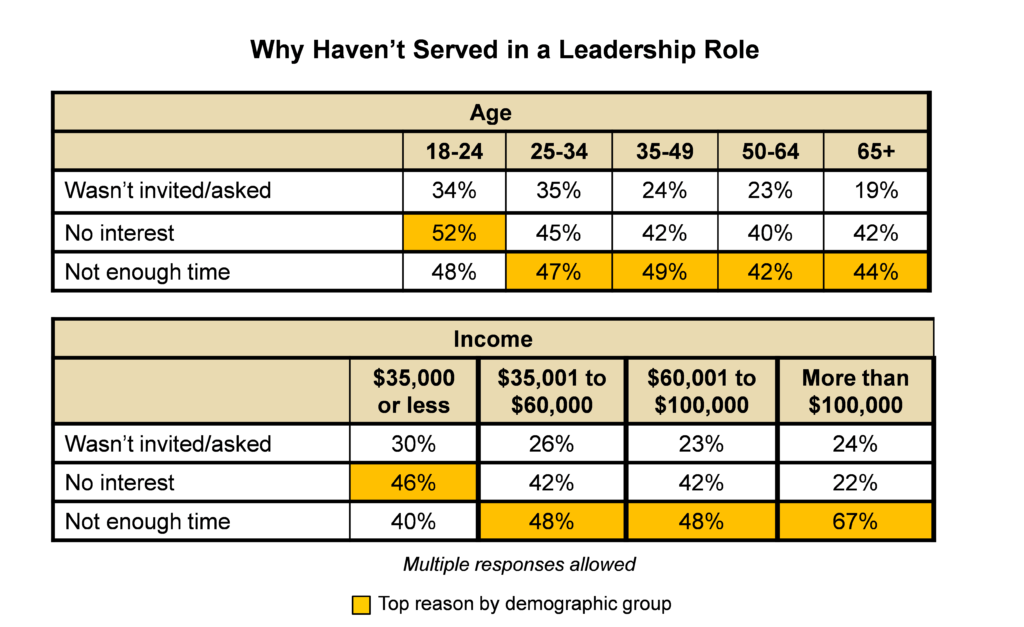 Interest in Serving in Leadership

Although many have not served in a leadership role within their community to date, more than three in five rural residents show interest in doing so, nine percentage points more than 2013 study findings. About a third (32%) indicate that they would definitely be interested in being invited to serve, and another 30 percent say they might consider doing so. Thirty-nine percent say that they have no interest. 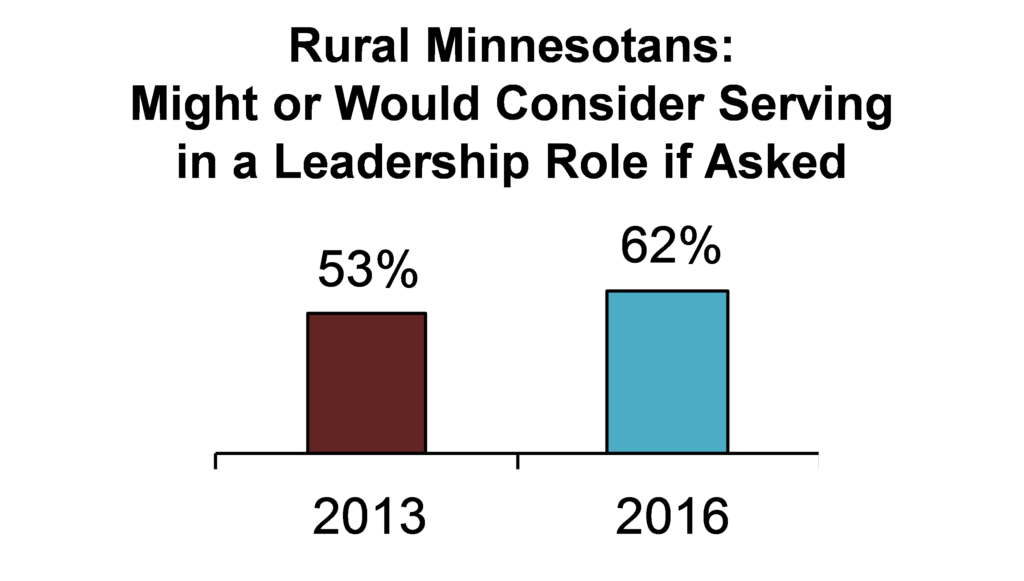 Residents of Northwest Minnesota are also more likely to say that they would definitely consider serving in a leadership role, compared to other rural regions.

Age, income and whether or not the person owns a business plays a role in consideration of serving in community leadership. Rural Minnesotans ages 35 to 49, those with the highest incomes and business owners are the most likely to say they would definitely consider a leadership role if asked. 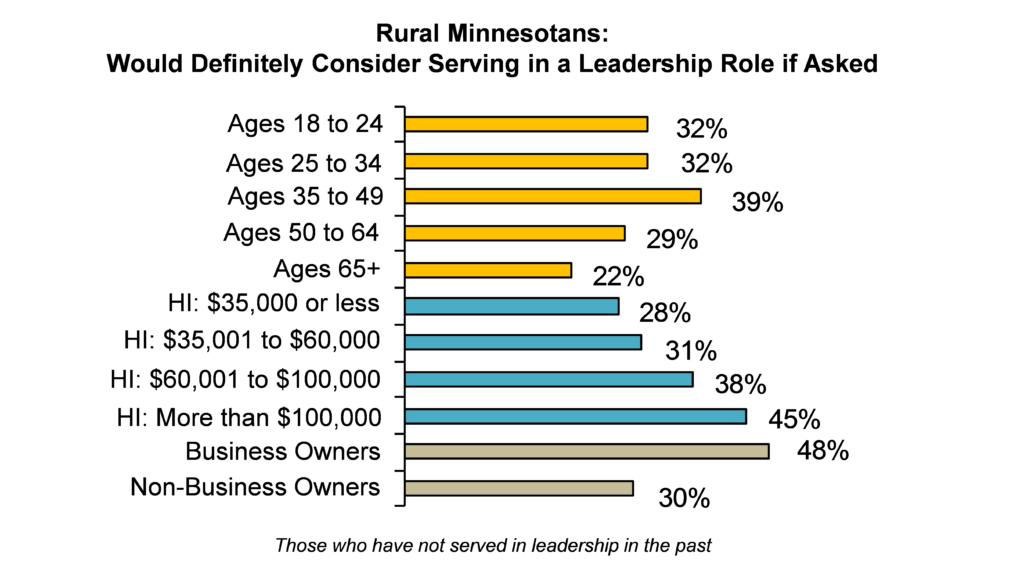 Environmental Stewardship →
Back to Rural Pulse 2016 Home  ·  Authored by Russell Herder. Published July 2016.
Back to Top