One of the nine dimensions is Economic Opportunity, defined as conditions where all people can earn an income that allows them to live with dignity. The economy of the community is sustainable and not dependent on exploiting human beings or depleting the natural environment.

Survey participants were asked to gauge the condition of their community’s economy now as compared to a year ago. Thirty-one percent of rural respondents say that they feel it has improved, 49 percent believe it has stayed the same, and 18 percent indicate that their local economy has worsened over the last year. Belief that the economic condition has improved is nine percent higher than opinions expressed in Rural Pulse 2013.

Women, those ages 50 and older and those with incomes of $35,000 or less voice the least confidence in their rural community’s current economy. Older Millennials (ages 25 to 34) show higher optimism than other age groups that the local economy has shown recent improvement. 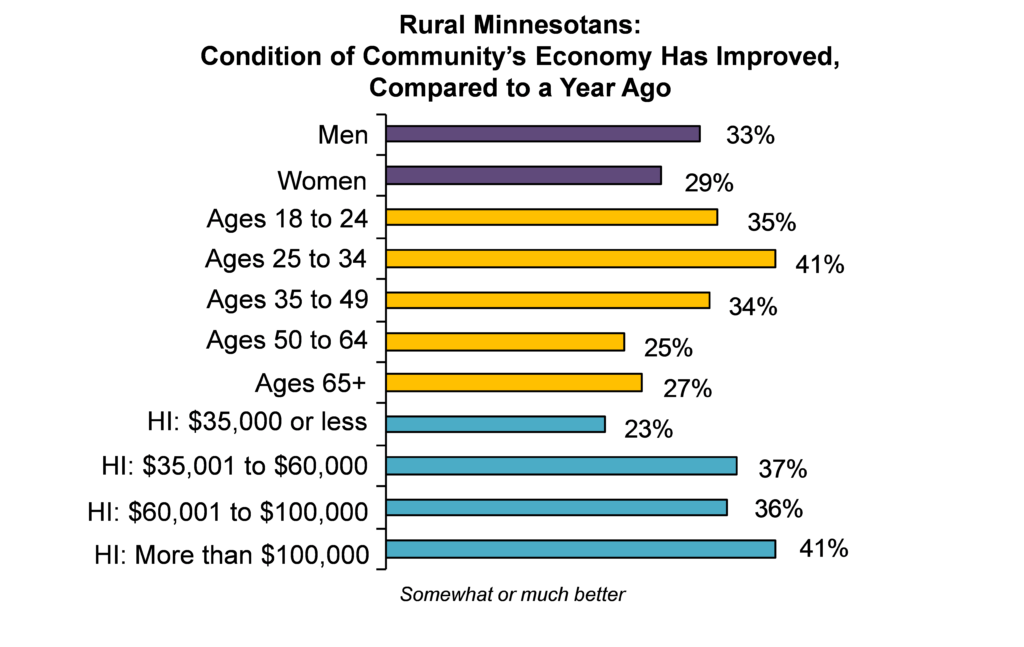 Those residing in the Northeast region are the most skeptical about the improvement of the economy, although the outlook compared to 2013 in all rural regions is more positive, if not the same.

Jobs Continue to be an Overwhelming Concern

Although the belief that there are adequate jobs paying household-supporting wages increased nine percentage points since Rural Pulse 2013, there is still a lack of confidence in the job market. Nearly half (48%) of rural Minnesotans feel that there are inadequate living-wage job opportunities in their community. Urban area residents are much less likely to believe that their city does not provide adequate living-wage jobs (28% urban, 48% rural).

While most regions are more optimistic about living-wage jobs than they were in 2013, those in northern Minnesota are the least likely to agree.

While there is concern about inadequate jobs that pay higher wages, about two-thirds (66%) of rural Minnesotans – and about four in five (81%) urban area residents – believe that their community maintains and grows existing job opportunities. Three in 10 (30%) rural respondents – and only 14 percent of urban Minnesotans – disagree.

Residents in the northern regions are the least likely to feel that their community successfully maintains and grows existing jobs.

Those in the Southeast and West Central regions are the most inclined to believe that their community sufficiently draws new businesses to their area, with the Northeast showing the highest disagreement.

Personal demographics play a role in how the job and business climate is viewed. Women and those ages 50 to 64 in rural areas are the least confident in the adequacy of living-wage jobs and ability of their community to provide an environment to promote job growth. Younger Millennials (ages 18 to 24) are among the more satisfied with job opportunities. 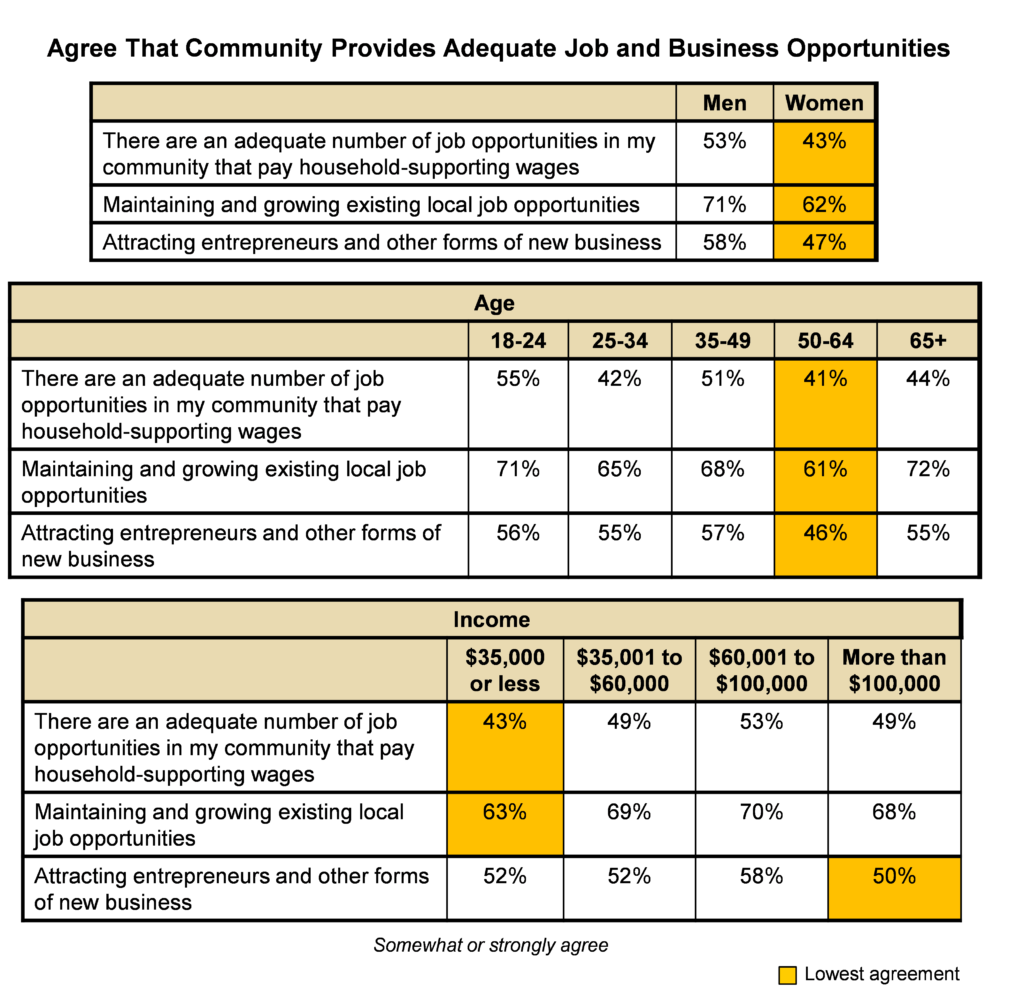 Rural residents surveyed are slightly less likely than those in urban areas (74% rural, 79% urban) to believe improved internet could assist with local economic vitality. About two-thirds (67%) of rural Minnesotans – and 77 percent of those in urban areas – feel their local area works together to maintain and grow businesses.

About three in four Minnesota residents (74% rural, 76% urban) say that they are aware of available resources to assist in finding employment. Skepticism continues to exist, however, regarding whether there are enough local resources available to help entrepreneurs start new businesses, as only about three in five (59%) rural Minnesotans – and two-thirds (66%) in urban areas – show confidence in such. 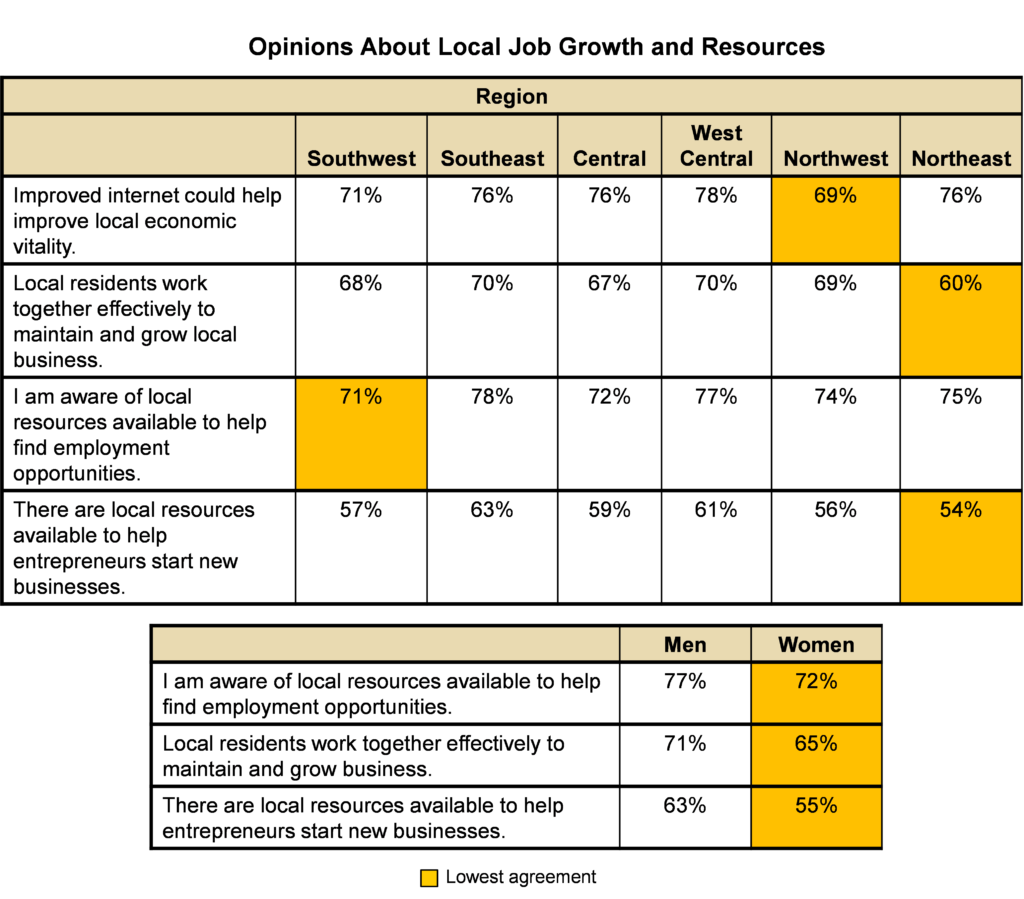 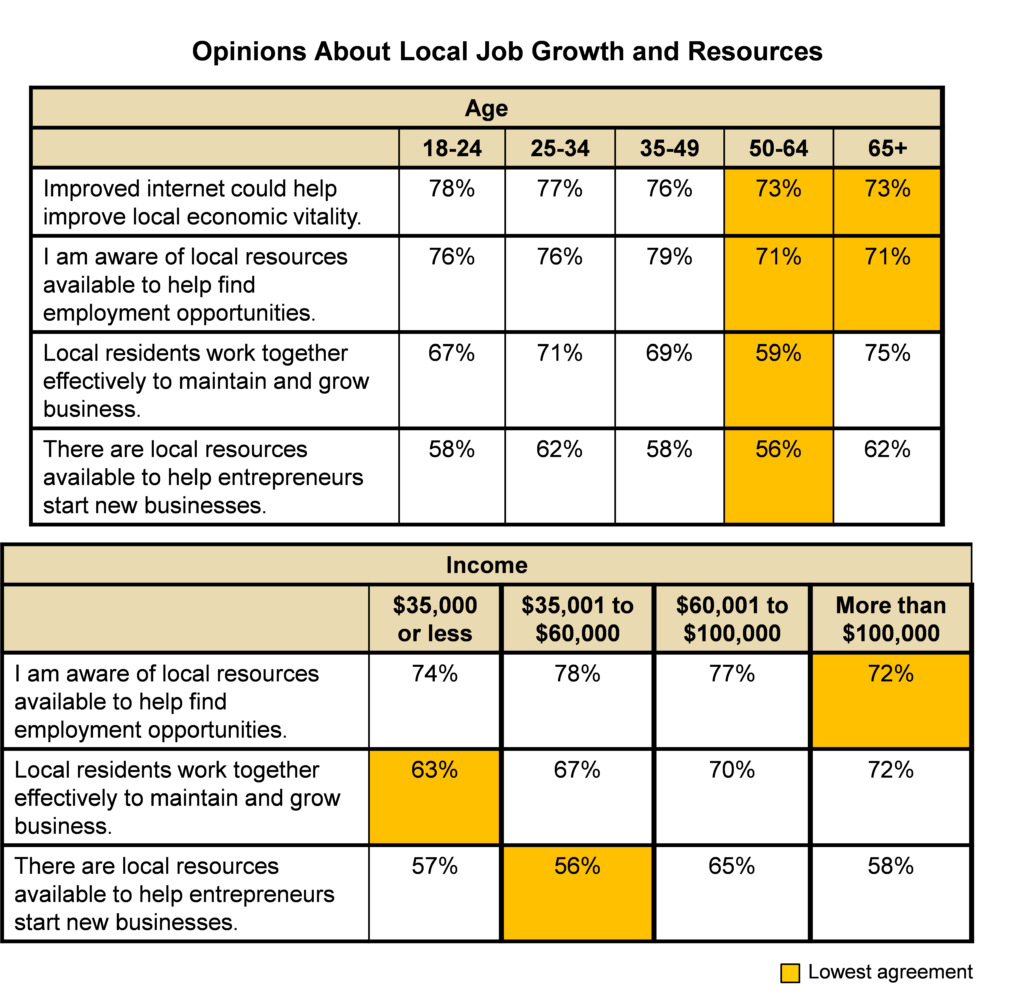 Impact of the Economy on Families

Northeast residents are the least likely to say their income went up.

Women (25%) are slightly more likely than men (20%) to say that their household income has decreased. Younger Millennials (ages 18 to 24) and those with lower incomes are also most likely to have had negative financial impact. Further, business owners (31%) are more likely than those who don’t own a business (21%) to say that their income has decreased. 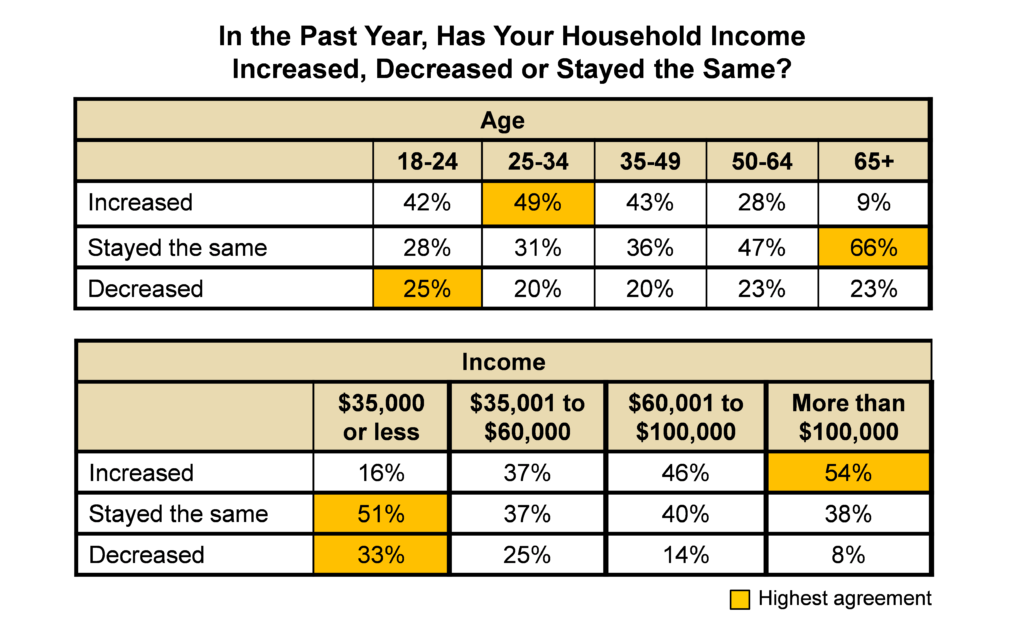 More specifically, 15 percent of rural residents – and 13 percent in urban areas – say that someone in their household has lost a job, which is only slightly higher than 2013 survey findings.

In looking at personal demographics, rural residents most likely to have experienced a job loss are Millennials and those with lower household incomes. 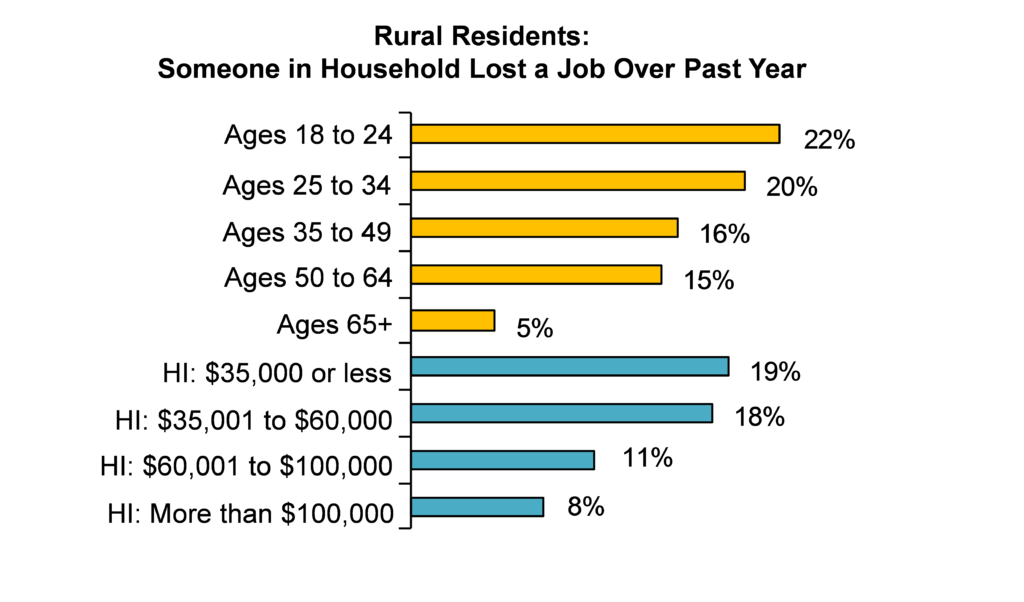