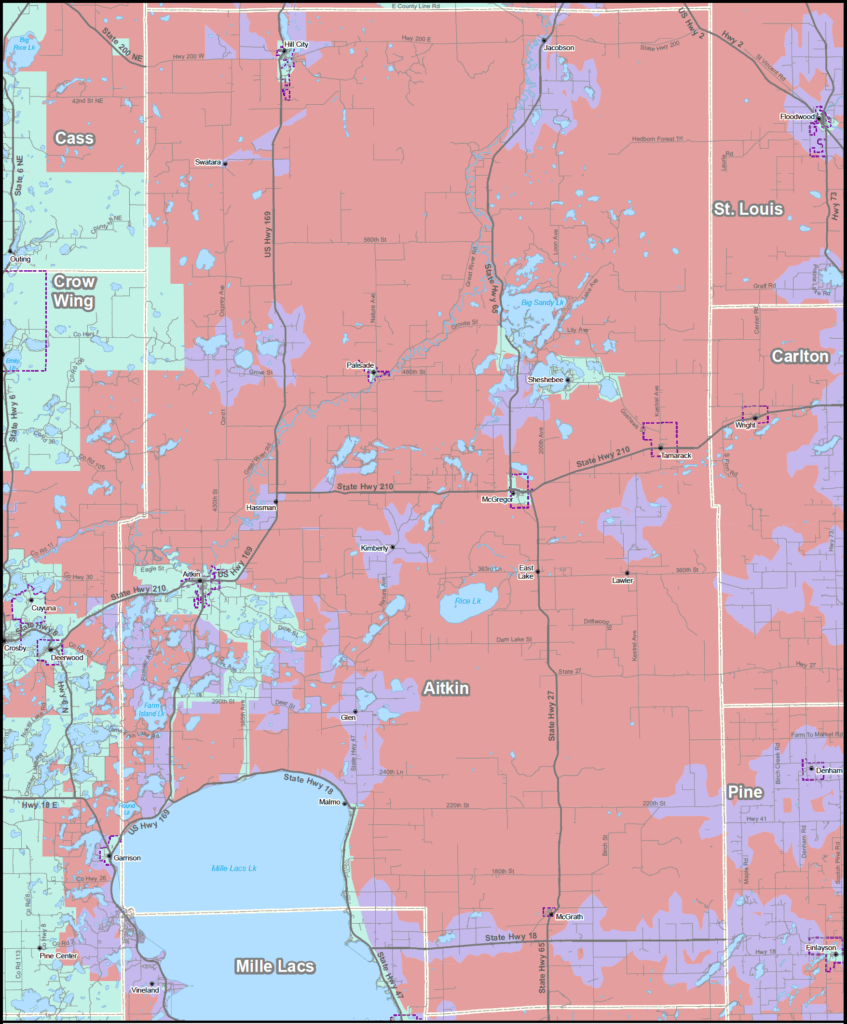 Aitkin County is not on track to make the MN State broadband goals for either  2022 or 2026. While the percentage of population covered at speed goals has increased, their ranking dipped this year and last, which indicates that they aren’t improving at the rate of other counties. And they were already in bottom 10 ranking.

Aitkin County government and residents have  long been organized to promote broadband access and adoption. The county partnered with rural sections of three neighboring counties to participate as the  Central Woodlands in the 2015-2016 Blandin Broadband Community cohort , and then as part of the IRBC (Iron Range Broadband Communities) cohort. Over the past four years the county has made considerable investment in both dollars and staff time in pursuing better broadband.

They have benefited from two MN state grants in their area:

While countywide there are 11 providers, you can see from the map below that much of Aitkin County is served by only one provider – and that is a large national provider. It can be a challenge to get a national provider to work in an area with such low population density. But Aitkin has been persistent.  In April 2019, the county economic development agency hosted a “Connecting the Dots” event to talk about broadband. Both a County Commissioner and Local Representative (Lueck) have asked the community to make broadband a priority.

In September 2019, Senator Klobuchar’s staff held a listening session in Aitkin County. They spoke about the need for government subsidies to build broadband in area with lower population density and CAF II funding was not sufficient because it only required 25/3 service.

Aitkin County could benefit from future grants from the state broadband fund. In 2019, three proposals  were submitted that would benefit Aitkin. Emily Coop, Mille Lacs Energy and SCI are hoping to upgrade different parts of Aitkin County. (That doesn’t mean they will get the grant; they have only applied.)

Blandin Foundation has published a matrix describing community broadband adoption activities by Aitkin and the other communities in its cohort https://blandinfoundation.org/content/uploads/vy/BBC_2015-16_Project_Matrix.pdf