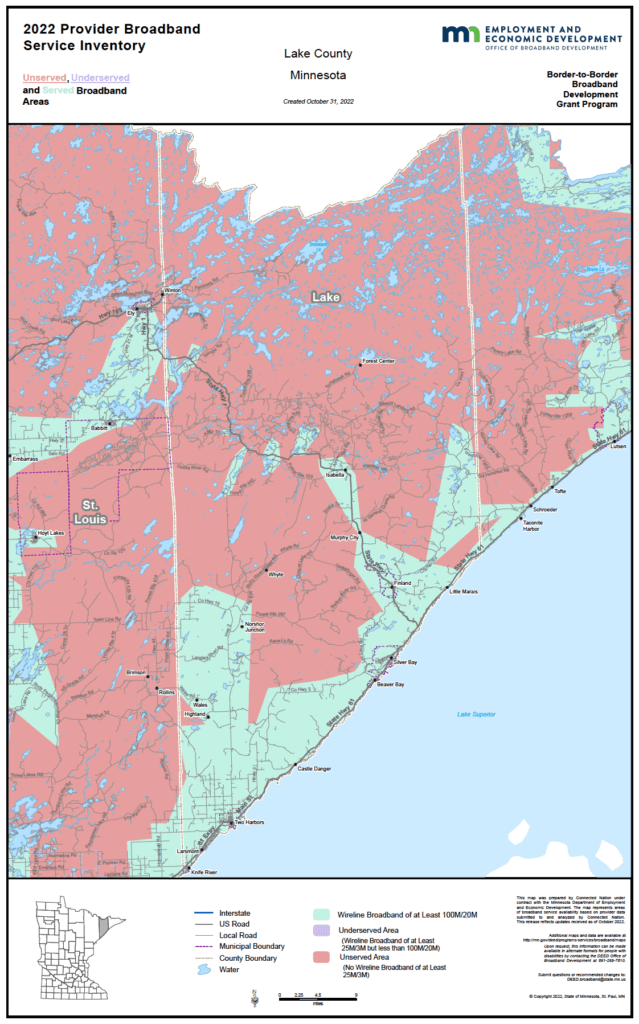 Lake County ranks 36 for broadband access and 37 for digital equity out of 87 counties. They had hovered  around 93 percent coverage to broadband of 100 Mbps down and 20 up from 2017-2021 but it dipped to 84 percent in 2022. The dip is likely the result of increased granularity of reporting. They have 1159 households without access to broadband at that speed. Estimates indicate that it will cost $10.7 million to get to ubiquitous broadband in the county.

Lake County received an American Recovery and Reinvestment Act (ARRA) award in 2010 to build Fiber to the Home (FTTH). That grant came with a lot of bumps in the road, but got them to 90 percent of the very remote county has access to 100/20 Mbps broadband. It started as a public network; it’s now privately owned but many people are well served. They are one of five counties that has not yet received border to border funding.

Last summer (2022), Lake County reported that a fiber cut took down internet and phone services in the county. It was a reminder that communities need speed but they also need reliability and redundancy.

Lake County’s code has been shifted from green to yellow because they have been stalled for so long and there hasn’t been a demonstration of working on the getting to the last 1000+ homes. They saw the one of greatest drops in broadband ranking – down 17 spots.

Lake County ranks 61 out of 87 for computer ownership. 89.1 percent of homes have a computer of device as compared to statewide ownership of 95.5 percent.