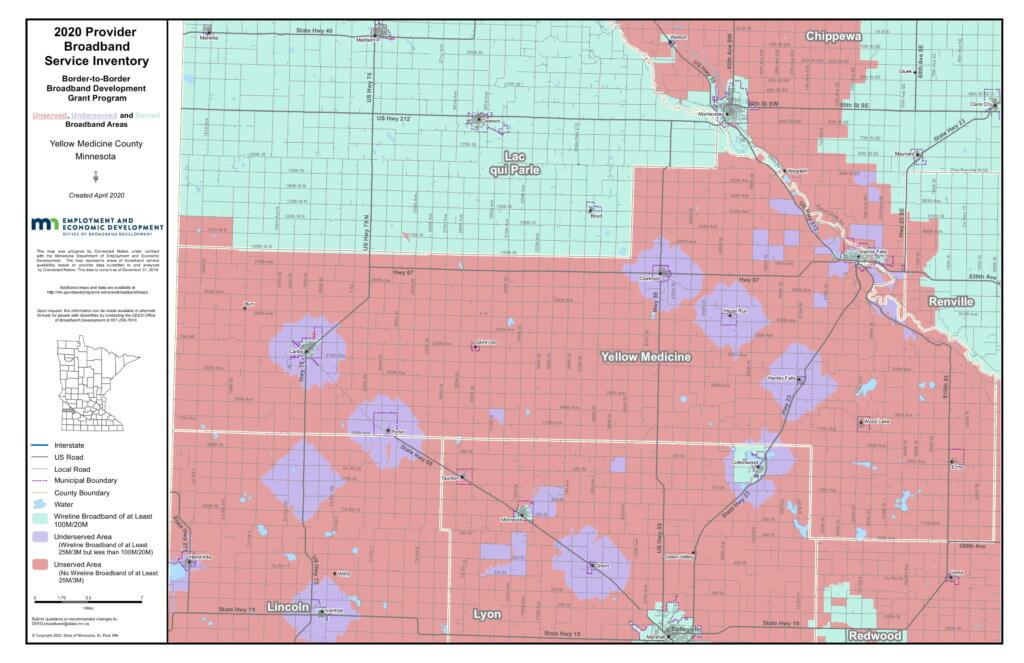 In 2018, Yellow Medicine unveiled a feasibility study and potential plans to work with Farmers on better broadband. Farmers has worked with neighboring counties that are now well served. It doesn’t look like that network has been deployed, however. Another option has been proposed by Midco to build out fixed wireless. That was proposed in March (2020), the next mapping should show whether that happened and met the speed goals of 100/20 Mbps.

In 2018, Yellow Medicine released a Blandin Foundation-supported feasibility study that indicates that it was not economically feasible to immediately build fiber everywhere without significant grant funding. However, at the time the county announced a tentative agreement with Farmers Mutual Cooperative to bring fiber to a significant portion of the county. The county has agreed to provide $4 million in funding subject to the Cooperative being able to find grants and other funding needed to build the project. If completed this project would cover a little less than half of the parts of the county that don’t have broadband today. Clearly that didn’t happen; but it’s a good indicator of what could help them.

We heard from Yellow Medicine in March (2020) that Midco has Connect America Fund (CAF) funding to help build out fixed wireless – in fact they have $2.3 million for Yellow Medicine. They are proposing 10 vertical assets from which to provide fixed wireless: 5 assets in the county and 5 outside the county that will serve the county. The mapping at the Office of Broadband Development was done in April, so any improvements since March would not be tracked.