When Michael Svigel realized his future would lead him on an educational path of a higher calling, he knew that he would need help with funding. A Blandin Foundation Education Grant became the answer to that calling, allowing him to explore educational opportunities that led him to a rewarding career. 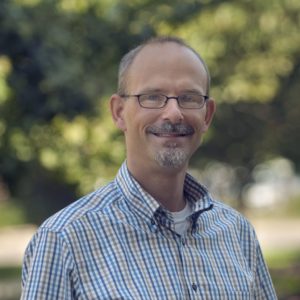 I was born in St. Paul, Minnesota. While I was still in my preschool years, my family moved up to the Iron Range—to Keewatin, Minnesota (which may be the easternmost town in Itasca County). My father worked at Hibbing Taconite as a maintenance mechanic and my mother worked hard to raise our family. Life was hard on the Range in the 1970 and ‘80s, but it became harder when my older brother lost a battle with leukemia at the age of eleven. I was just starting kindergarten, but the emotional and financial effects of that experience echoed throughout my teenage years.

My parents often worked several jobs to raise a family in an economy that had its ups and downs. With the passing of my brother, I became the oldest of three siblings. This meant I was the one to go to college. In my high school years, I was drawn into Christian ministry. Needless to say, vocational ministry isn’t a lucrative career. I wouldn’t be able to justify large student loans, and on top of that, this career path meant that I’d need a specialized degree that I couldn’t get from a state university.

After graduating from Nashwauk-Keewatin High School in 1991, I attended Hibbing Community College, taking general education courses that would fold into any degree. But somehow, I would need to scrounge together enough funding to answer my calling.

The Blandin Foundation Education Grant became the key that unlocked my future. Unlike other scholarships I explored, the Blandin grant didn’t require that I attend a specific college or university, didn’t rule out any particular degree program, and didn’t require an in-state institution. The Blandin Foundation scholarship freed me to broaden my horizon and empowered me to follow my calling wherever it would lead.

After a year and a half at community college, I was able to transfer to Cairn University, a Christian liberal arts college in Langhorne, Pennsylvania. The aid I received from the Blandin Foundation scholarship—along with the rugged work ethic I learned growing up on the Iron Range—allowed me to graduate with my bachelor’s degree debt-free! This, in turn, enabled me to attend graduate school to earn my master’s degree and Ph.D.

For the last decade, I’ve been teaching full time, preparing men and women for a variety of ministries worldwide—from missions and relief work to pastoral and teaching positions.

But my story doesn’t end here in Dallas, Texas. A great moment in my career as a professor training future ministers came when I asked one of my students at the graduation ceremony where he was headed. He responded, “I’ve taken a pastoral position in northern Minnesota.”

“Where in Minnesota?” I asked.

I felt like my journey had come full circle. That following summer I had a chance to meet with that former student for lunch in Grand Rapids. I told him how Blandin Foundation helped launch me into a calling I couldn’t have achieved any other way.

So, with countless other educational grant recipients, I’ve been blessed by Blandin Foundation’s eagerness to give generously . . . and with no strings attached.