One of the nine dimensions is Infrastructure and Services, where the community has adequate infrastructure, and all people have access to essential services.

About four in five rural residents (79%) believe that their community offers equal access to essential services, while 17 percent do not.

Women and those ages 18 to 24 are the least likely to agree that all sectors within their rural community are equally served.

Residents in Southeast, West Central and Central Minnesota are the most satisfied with community service offerings. Those in the Northwest had the most significant decline in service satisfaction since 2013 (down 20%).

Again, rural residents overall, regardless of region, are less likely than those surveyed in 2013 to feel satisfied with improved internet access in their area, with the West Central and Southwest regions displaying the sharpest declines (27% and 25% respectively).

While about three-quarters (74%) of rural Minnesotans at large agree that there is sufficient housing in their community, 22 percent are concerned about adequate availability.

Those in Central Minnesota and the Southeast are the most likely to feel positive about adequate housing in their community. Those in the Southwest region showed the largest decline in housing satisfaction from 2013 findings (down 13%).

While 72 percent of rural Minnesotans agree that their community ensures good roads and other infrastructure, a quarter of those surveyed expressed concern about such. 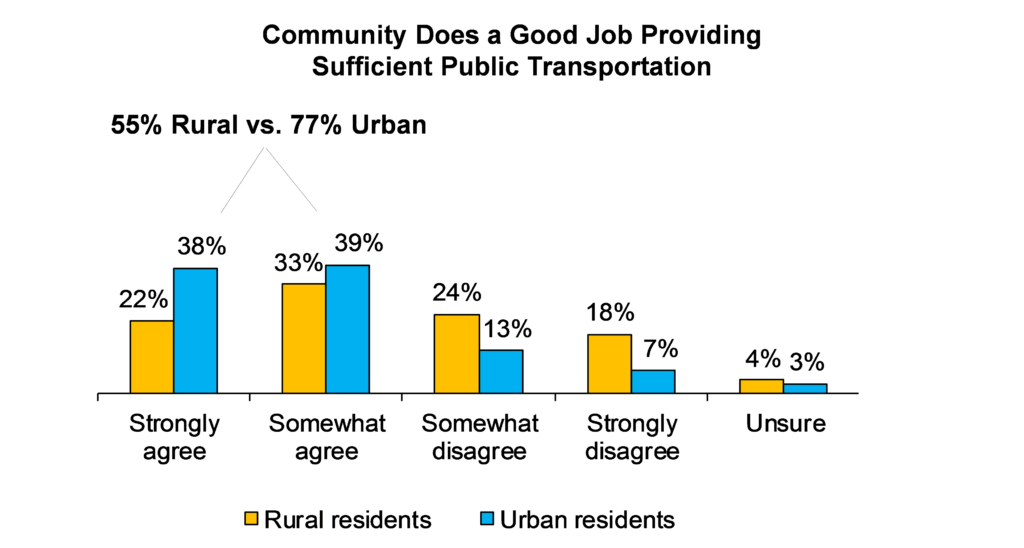 Rural residents overall, regardless of region, are less likely than those surveyed in 2013 to feel satisfied with public transportation options, with those in the Southwest showing the steepest decline in satisfaction (down 25%).

Caring for the Elderly

Most (83%) rural residents say that they have confidence in their community’s ability to provide services for the elderly, while 11 percent do not agree.