Partnership Purpose: To support leaders by building awareness and giving voice to area issues across a variety of fields, including education, economy social justice, cultural competence, especially in the Itasca area and throughout northern Minnesota.

The passion in Maggie Montgomery’s eyes matches the conviction in her voice, leaving no doubt: community matters. To her. For its own sake. And for the sake of the people who choose to live, work and listen to community radio in the roughly 7,600 square miles of north-central Minnesota from Bemidji to Ely.

Since she took the helm at Northern Community Radio in 1995, the iconic station has expanded its reach, honed the skills of its volunteers, and earned a spot in the national community radio scene. Listeners are loyal, loving music and conversations as they can happen only in northern Minnesota.

Dialed in to Community

Staff are keenly attuned to the nuances of their listeners, as reflected in the station’s programming. Half the playlist is women musicians. Local musicians also get top billing. There’s national and local programming on rural issues like culture, artists, and the benefits of healthy eating.

Fishing, local and Minnesota history, and the Ojibwe language each have a weekly timeslot. So does nature, on a show called Phenology.  On the River, another weekly regular, showcases volunteer DJs. The Give and Take is produced “to meet people and hear stories that connect us to this place we live.” Recent topics have included a high-school’s 4-day schedule, a local dog musher’s preparations to run the Iditarod, and energy-saving tips from a propane gas provider.

“People listen to the radio by convenience. They get in their cars and turn on the radio, and if they don’t like what they hear, or it’s not what they expect, they change the station,” Montgomery said. “So our job is to provide somewhat unexpected content at expected times.”

The station maximizes its capabilities as an independent media outlet (Community radio stations are different from public radio). Staff have the freedom, and the backing, to take deep dives, creating multi-part series on topics such as the experiences of first-generation college students at a local tribal community college. Some, such as the US-Dakota War of 1862 and first-person victim accounts of domestic violence, shine light on seldom-discussed community issues.

“People told their stories,” Montgomery said of the latter. “A lot of them were not easy to tell.”

From the series grew new work. The station hosted its 10th annual Mississippi RiverFest – a weekend concert at the KAXE amphitheather on the Mississippi River in Grand Rapids – in partnership with Advocates for Family Peace, a regional provider of family crisis and domestic assault services. The move raised awareness of the harmful toll abuse takes on area families, and raised money for Advocates’ work.

The same principles apply to the station’s involvement in other work in service to residents at the fringes of community. It pulled together a strong partnership in the Bemidji area to make a difference in the community’s perception of Ojibwe culture, important as 10 percent of the city’s residents are Native American. The Sanford Center Bemijigamaag Powwow in April 2015 drew 4,000 people. Collaboration tapped key interests: Sanford Event Center had long wished to host a powwow, the area’s Native American community had identified a need to hold one. NCR’s interest lay in giving voice to a seldom-heard community group, and to be a catalyst for learning. The station plans to build a full series of storytelling leading up to and during the event.

As with much of KAXE’s work, it was a matter of being in tune with community conversations, staying open to new ideas, and aligning energy and resources toward a goal in which numerous partners could see themselves and their roles.

“It’s part of the healing that’s needed in that community. We had a sense that this needs to happen, that this is the right event at the right time,” Montgomery said.

In its 40-plus years of operation, Northern Community Radio has grown on all levels. Staff has doubled, and its corps of volunteers stands at more than 75. They built a new studio in Grand Rapids, and expanded operations to the Bemidji area with its 50,000-watt sister station KBXE. They have about 14,000 listeners each week and 4,000 Facebook followers; some 500 take in RiverFest. In 2013, membership increased by about 20 households per month.

The station also has made its mark on the community radio industry. Staff are regularly invited to present at regional and national conferences, and leaders in communities across the Midwest seek guidance as they launch stations.

But in Montgomery’s estimation, what happens at home is the most important. The lives touched. Humor shared. The relationships – and uniquely northern Minnesota communities – built and sustained.

She points to the Great Northern Radio Show as a successful culmination of the station’s vision and purpose. Produced four times a year, each time in a different community, the program discovers and showcases local talent, and has challenged and expanded the station’s technical expertise. Most importantly, host Aaron Brown and the cast of each show strengthen sense of community.

“Aaron’s observations about each community are based on his northern Minnesota sensibilities,” she said. “He uses his personal sense of place as the lens through which he interprets what he sees and learns about each place. The community is the star the show – he illuminates aspects place so that, even if you haven’t been there, they become part of home to you.”

Blandin Foundation has stood shoulder-to-shoulder with Northern Community Radio as it transformed into an Itasca area icon. Early grants fostered its pioneering start. Ongoing support assisted as KAXE expanded its programming and geographic footprint. The 2005 move to a new location was made in part with assistance of a Foundation grant. (We couldn’t ask for nicer next-door neighbors along the mighty Mississippi.) Sustaining support has been provided for programs such as the Morning Show, Between You and Me, and Great Northern Radio Show.

Staff also support KAXE individually, through personal donations. Some have served as volunteer radio hosts. Nearly all tune in for hyperlocal information and humor, and the rich, quixotic playlists that signal we’re home. 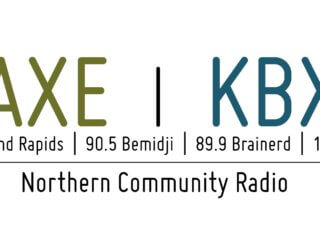 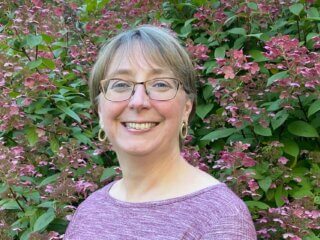